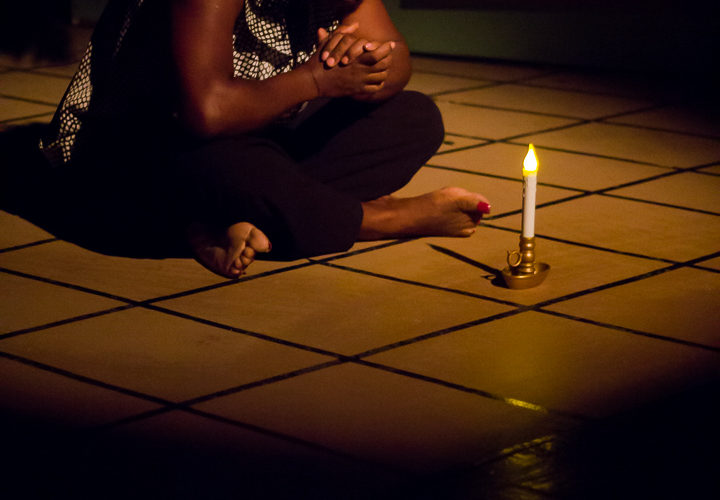 The premise of Nine Night is obvious from the early lines. Set in England, it opened at the Edna Manley College of the Visual and Performing Arts last weekend and continues this Friday through Sunday, October 21. It lies in the British accent of Anita (Chloe Lawrence) contrasting vividly with the Jamaican tongue retained by her Aunt Maggie (Tia Malcolm) and Uncle Vincent (Shemar Ricketts, heralding the misfit of original migrants to England, and the generations they begat there which ‘Nine Night‘ explores.

Additionally, there is the simmering bitterness of Trudy (played by Samantha Thompson), the child who was left behind in Jamaica by her mother Gloria, which breaks through the camouflage of literally larger-than-life good cheer after she visits England for her mother’s funeral. There is resentment on the other side of the Atlantic, too, as Trudy’s half-sister and brother Lorraine (Sheryl Minto) and Robert (Alexander Williams) vividly recall Gloria’s emotional and financial engagement with the distant Trudy, which affected their relationship with their mother.

Throw in the mix, the pregnancy of Robert’s 45 year-old wife Sophie (Kwela Cole) and the stage is set for an emotional collision around death rituals which is set at a moderate pre-intermission pace, and accelerates explosively with Trudy’s arrival. This precipitates comedy Uncle Vin dancing Kumina around the dining table, Lorraine poised with a knife over a supine Trudy, and a last glimpse of sibling reconciliation as the lights go down.

The premise of the play written by Natasha Gordon, is not novel, and although the Windrush generation of West Indian migrants to England is not explicitly presented, that historical reality looms over ‘Nine Night’.

The play unfolds in the sitting room (complete with coat rack) and kitchen of a home in England. The set, designed by Abena Chevannes and built by Omar Scott, is superb – from the cream and black floor covering to the stairs visible through an open door, which Maggie and Vincent are careful to struggle up, (keeping in character) as they visit the dying Gloria (who is never seen, but whose spirit looms large over ‘Nine Night’).

There are rituals within the tussle of whether or not to observe the Jamaican ritual of a nine night in England, from the rearrangement of furniture (which must have presented additional challenges to stage manager Tiaunah Coore) to confuse the returning spirit, to the libation of Jamaican white rum which Trudy comes up with among her newspaper wrapped gifts from Jamaica. Director Elizabeth Montoya-Stemann, does a good job of handling the shifts in tone of ‘Nine Night’ and the actors maintain their accents throughout the physicality that climaxes the production.

Still, all is not a seamless flow in ‘Nine Night’, as the matter of the house being sold which is raised by a sometimes insufferable Robert (whose latest hare-brained get-rich scheme is a hairbrush designed for black people’s coils) and vehemently contested by Lorraine, is unresolved although an interested party’s visit was scheduled. Although visually appealing with the lighting designed by Dwight Peter Roper and operated by Paulashay Forbes, the scenes where a glowing candle (of the electrical kind) is carried out by a lone figure intoning a stereotypical ‘hmmm’ seem contrived; the calypso which overlays some of the dialogue in two of the post-death scenes, is overdone as an attempt to maintain good spirits. And, although good for a laugh, the tossing off of Maggie’s wig as she sees and speaks to Gloria, is enforced comedy that distracts from the focal point of Nine Night‘s threads coming together.

Fortunately, these do not overpower the cast’s excellent acting, and a strong script spiced up with a couple of scatological utterances, and a “pum-pum” delivered with Robert’s British touch.

And for those who would have missed the point, when the disjoint between rituals intensifies, Lorraine does say “This is not Jamaica. This is my mother’s home and she is still here.”

Nine Night is produced by the School of Drama, Edna Manley College of the Visual and Performing Arts.

Sandria Campbell, Devaughn Thompson, and Krishara Bruff do a good job at putting the wardrobe together, and Jaycie Lewis does make-up.