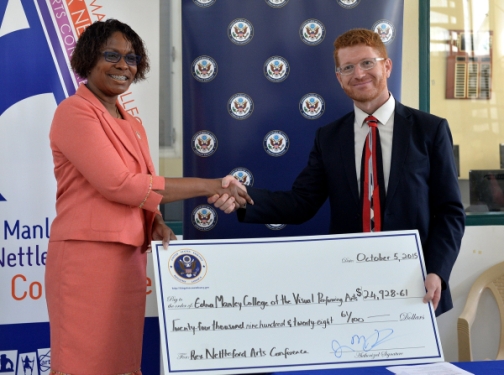 KINGSTON, Jamaica (JIS) – The Edna Manley College of the Visual and Performing Arts (EMCVPA) has received donations amounting to $4.9 million for the staging of the 2015 Rex Nettleford Arts Conference

The conference was first held in 2011 to celebrate the late Professor’s significant contribution to Jamaica’s performance arts.

Vice President of Academic Affairs at Edna Manley and Conference Co-Chair, Carol Hamilton, said that the four-day conference, from October 14 to 17, is a critical component in developing the arts as a major contributor to the economy.

She was speaking at the handing over of the funds at the college’s Arthur Wint Drive location in Kingston yesterday.

Reposted from the Jamaica Observer: http://www.jamaicaobserver.com/news/Edna-Manley-College-gets–4-9M-for-Rex-Nettleford-Arts-Conference